As we enter our collective lunch breaks, we thought this number might make you think again before eating and driving: There are nearly nine times as many potentially harmful bugs on your steering wheel as there are on an average toilet seat.

Yeah, that’s right — gross. That pleasant fact comes from researchers at Queen Mary University inLondon. Overall, there are about 700 bacteria per square inch on a steering wheel, compared with 80 bacteria over the same area on a toilet seat. Most of the micro-organisms aren’t harmful to humans, but there are some, such as Bacillus cereus, which can cause foodborne illnesses when digested. I guess that wouldn’t be a problem if you washed your hands before eating, but according to the study, 42% of drivers regularly eat in their cars while driving. 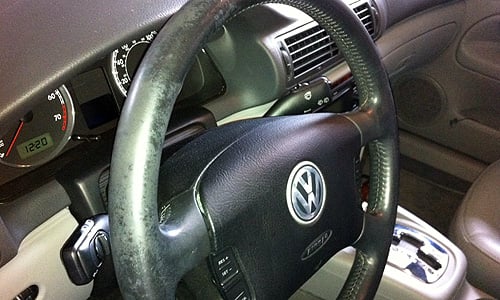 Adding insult to injury: Only 33% of drivers clean the inside of their cars at least once a year, and about 10% of car owners have never cleaned the interior of their vehicles, the study says.

Regularly cleaning the interior of your vehicle will help avoid potential health risks from bacteria, the researchers said. Ughh.